On the 6th March 1914, a group of men, led by Dr. G. Lyttle, met in the Lecture Hall of Malone Presbyterian Church on the corner of Balmoral Avenue and established Balmoral Golf Club. As Europe went into the turmoil of the Great War, a board of trustees acquired 75 acres on lease from Hannah and Teresa Hamill at an initial rental of £150 per annum. Subscriptions were struck at a guinea for gentlemen, half-a-guinea for ladies and ten guineas for life membership. This industrious committee set about raising funds for the development of the course by organising dances, whist drives, bridge but especially during the Great War years, income was raised from tillage.

In those days, horse power was used not only to mow the fairways, but to plough areas of the course for the cropping of hay, potatoes and flax, which, along with manure, provided a valuable source of income. This agricultural activity (allegedly still pursued by golfers today) may explain the subtle undulations and furrows which still exist on the course today. The flatness follows from the fact that there was once an aerodrome on the course up until 1918 which was used by the Royal Flying Corps and later the Royal Air Force. 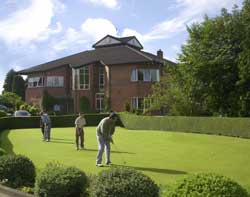 As funds increased and assisted by the issue of a Debenture Stock at 6% per annum, the founders had purchased sufficient land for the development of eighteen holes, built a new clubhouse and four tennis courts. Whilst raising funds for self-development, the members established Balmoral’s reputation as a charitable body, assisting in the entertainment of wounded and limbless soldiers and commissioned the Roll of Honour Board for those members who fought in the Great War.

And then along came World War II. The ground to the right of the third hole, now Taughmonagh Estate, became a P.O.W. camp; an anti-aircraft battery and an air-raid shelter were built on the thirteenth fairway. It is interesting that, in spite of the War, the locals could still obtain golf balls by trading cigarettes with the P.O.W.’s. During these times, famous names played the course, notably the World Heavyweight Boxing Champion, Joe Louis, and the fighter pilot ace, Douglas Bader.

The first professional at the Club was Tom McKinstry, assisted by his son, and this pairing was probably the first father and son partnership to play in the Irish Professional Close at Portstewart in 1931. For his services, Tom McKinstry received a testimonial of £25 in May 1936. Over the years, many assistants have come and gone from Balmoral achieving great distinction in the golfing world. Crawford McCloskey became a highly acclaimed professional in South Africa and the daughter of Captain Foster, General Secretary, became the Irish Ladies’ Amateur Champion and an Irish International. Three generation of the Loughran family have held the position of Head Greenkeeper. Paddy Loughran who followed in his father’s footsteps retired after 51 years of service in 2004 and then his son Gabriel. Gabriel’s grandfather was the assistant to the late Fred Daly M.B.E., who came to Balmoral from the City of Derry Golf Club in March 1944.